Blade Runner was my favorite movie as a kid and because of it, Rutger Hauer is one of my favorite actors ever.  Ladyhawke sounded like a cool movie so I watched it a few weeks ago. 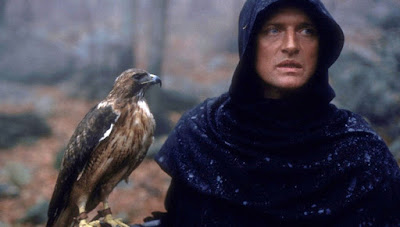 It actually isn't that good, but the concept is cool. Side note: I wish studios would remake movies that had a great concept but were poorly executed, rather than movies that nailed it the first time.  A pair of lovers are cursed so that every day, the woman turns into a hawk, and every night, the man turns into a wolf.  Also, while in animal form each of them has animal-level intelligence so they can't understand what their human-form partner is saying beyond simple things like "stay."

So, here's a Ladyhawke class where you play as both characters.  Effectively, at any given time you're playing as one of them with the other being like an animal companion.

Assign them each a class– either fighter or thief.  No spellcasters here.  Each of them will have the saves and abilities of their assigned class.

The two of them share XP, and level as an elf.  If you're using a system where all classes advance at the same rate, they level as if they're one level higher.

Now pick an animal form for each of them– anything at least as big as a cat and no bigger than a bear, and it has to be a mundane animal. The animal form also has whatever abilities it would usually have like night vision or flight.

In human form, each character has the normal hit points for their class.  In animal form, it depends on the animal's size.

These extra hit points are lost first if you're wounded, much like temporary HP in later editions of D&D.  Shapechanging to a weaker form when you're wounded can't kill you.

You need to sleep six hours a day, but you can be more flexible than most people about sleep schedules.  You can split that into two shorter blocks of sleep for each character, you can have them sleep one at a time while the other keeps watch, etc.  They each get the benefit of a night's rest whenever they complete their six hours of sleep in one day, and if they don't get that much they'll suffer from sleep deprivation as normal.

Each character needs to eat as much as the average of their human and animal form, regardless of which form they're in when they do their eating.  There's a cost to being able to turn into a bear.

While in animal form, each character has the intelligence of a well-trained dog.  They can recognize friends like the other party members, they can obey simple commands like stay, eat, attack, but they don't understand human languages, not really.  They don't have to check morale because they're perfectly loyal to each other; you can control your animal person as long as you role-play the lack of human-level intelligence properly.

If either of them dies, the other one is soon to be out of the game, life just isn't worth living once your soulmate is dead.  They'll either go insane or sink into an uncurable depression or jump off a bridge or just go berserk.  You can keep playing them for the remainder of that day in order to go out in a blaze of glory, but after that it's time to roll up a new character.

So I published this and then realized I never said anything about actually lifting the curse.  Shit.  Uhhh...let's say the referee secretly defines how to do that, and you start with some idea of who cursed you and where and how you can learn how to lift the curse. If you figure that out and do it, the curse is lifted and you pick one character to be your character from then on, and the other to be their retainer.  From then on they each level separately as their respective class. Also they each gain a level for doing that.
Posted by Captain Caveman at 8:36 PM